The UK based development finance institution and impact investor, CDC, invested $40 million dollars into Liquid Telecom. The deal is part of an equity arrangement initially structured in 2018 when the CDC made a $180 million dollar transaction.

The investment will fund the expansion of Liquid Telecoms, Africa Data Centres with the aim of positioning the company as the top data center operation in Africa.

Data centers reduce costs for businesses by offering affordable data storage. In addition, the development of software as a service (Saas) applications will spur innovation and increased activities in start-ups as it allows for improved delivery of software such as office software, payroll processing, collaboration tools, and human resource management among others.

Liquid Telecom is a communications solutions provider that offers independent fiber, data centers, and cloud technology. It operates across sub-Saharan Africa with a footprint in 13 countries. The company has built the largest fiber network in Africa covering 70,000 km.

Liquid Telecom’s expansion has allowed the reach of digital infrastructure to spread across the continent.

“We remain committed to improving digital infrastructure in Africa and helping the continent’s governments, businesses, and people gain access to quality online services. Our aggregate investment to Liquid Telecom now stands at US$220 million, this will play an important role in addressing the increasing demand for digital services and help close the digital divide between Africa and other regions. Investing in Africa’s digital infrastructure is vital for building resilience within African economies and accelerating their growth.”

Digital infrastructure is still poor in Africa consuming very little of the global bandwidth. A report by the UN Broadband Commissionsuggests that there is a funding gap of $100 billion required to bring Africa to world standards in terms of digital technology.

At present, internet speed is low in most countries, and the cost of data is prohibitive hindering the vast majority of the population from accessing the internet. In addition, mobile penetration, though increasing remains hampered by infrastructural challenges. 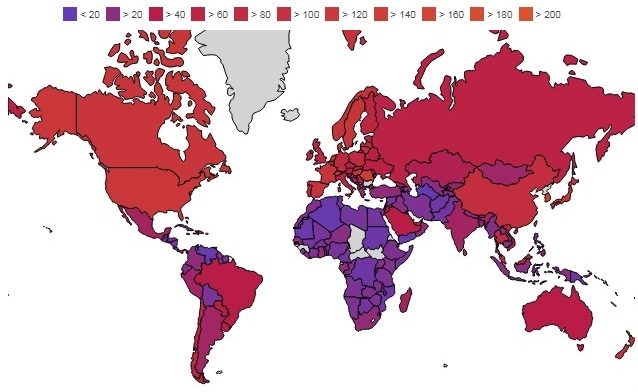 Commitments to improve access to ICT will go a long way in improving livelihoods, job creation, and financial inclusion. Furthermore, the uptake of disruptive technologies such as e-health, fintech, and e-agriculture would increase start-up activity and improve already established enterprises. This has the potential to bring Africa to the level of other world players.

In addition, improved infrastructure in e-management could potentially transform the public management system in Africa thus improving the ease of doing business.

Given Africa’s youthful, and increasing population the demand for digital solutions will continue to grow. The digitalization of Africa is an important tool in boosting economic growth, time jumping Africa onto the world’s stage as an equal actor.