On a peninsula east of Lagos, 30,000 workers are employed on a project that holds out the promise of transforming Nigeria’s economic fortunes.

It’s here that Aliko Dangote, Africa’s richest man, plans to spend more than his net worth of $13.5 billion building one of the world’s biggest oil refineries. If he succeeds, he could end the irony of Africa’s biggest oil producer importing $7 billion of fuel a year, and instead see it meeting its own needs and supplying neighboring nations.

The collapse in the oil price and Nigeria’s woeful track record on industrial projects are significant risk factors. Yet Dangote’s bet has the potential to revolutionize Nigeria’s economy, with its operations adding $13 billion, or 2.3% to gross domestic product, according to a 2018 estimate by Renaissance Capital. Central Bank Governor Godwin Emefiele has said that the project could employ more than 70,000 people when operational.

“Yes, the risks are high, the challenges are high,” said Devakumar Edwin, chief executive officer of the refinery complex, who’s worked with the billionaire for about three decades. “But the rewards are also high.” 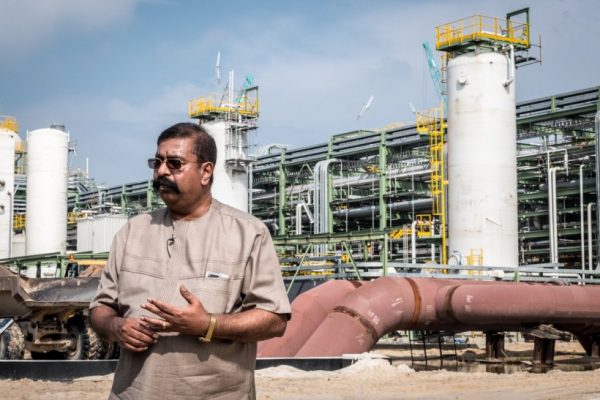 The site is stacked with superlatives. Nigeria’s largest-ever industrial project, it boasts a distillation column for separating crude into various fuels at different temperatures that is the largest of its kind in the world. The 650,000 barrel-per-day refinery is just part of a $15 billion petrochemical complex that will also house a gas processor and the world’s biggest plant for ammonia and urea, which is used in making plastics and fertilizer.

Still, Nigeria’s previous attempts at motor fuel self-sufficiency have come to nothing. Its four state-owned refineries, opened in the 1970s, ran at a fraction of capacity before they were closed in January for a revamp.

An initial attempt by Dangote to enter the refining business foundered. In 2007 he bought one of the state plants only to see that privatization swiftly reversed by a new government.

Earlier efforts to use industrial development as a way of cutting the country’s dependence on oil have mostly fallen short. Nigeria has sunk at least $5 billion into the Ajaokuta steel mill project on the banks of the Niger River since 1979, and it still isn’t in production. 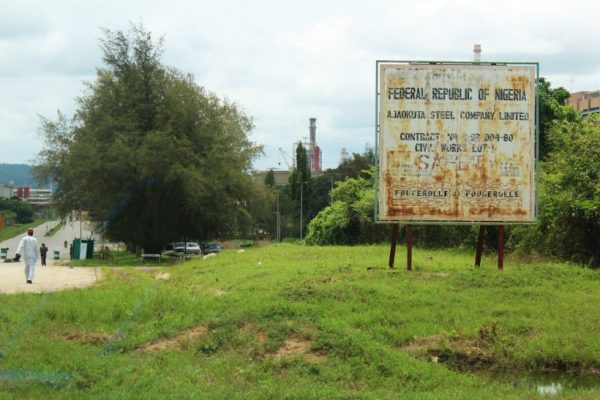 “As a symbol of Nigerian progress it’s quite important,” Charles Robertson, chief economist at Renaissance in London, said of the Dangote refinery.

Nigeria needs all the help it can get. The nation is reeling from the impact of the Covid-19 pandemic and the record plunge in oil, which accounts for more than 90% of its foreign exchange earnings. It has been forced to devalue its currency, the naira, twice since March, and take its first-ever loan from the International Monetary Fund, which forecasts a 5.4% economic contraction this year.

Even for Dangote, who has built a business empire that includes cement factories around Africa and owns assets ranging from sugar mills to salt refining facilities, the petrochemical complex is ambitious.

“Nigeria will soon become the biggest and only urea exporter in sub-Saharan Africa for the first time,” Dangote said in March. “And we are not only exporting, we are exporting big time.” Fertilizer exports alone will generate about $2.5 billion in revenue annually, he said.

Roads and jetties had to be built to carry heavy cargoes, while a quarry with the capacity to store 10 million tons of granite was dug solely for the project.

The company has opened talks with oil producers for the supply of crude to the refinery, although it hopes that within two years of beginning operations as much as 100,000 barrels a day will come from two oilfields it bought from Royal Dutch Shell Plc, Edwin said.

It’s “a game-changing development for regional supply,” said Jeremy Parker, an analyst at Citac, a London-based consultancy on the oil refining and distribution business in Africa.

It also benefits from government backing. “We are encouraging every participant to establish refineries in this country,” Mele Kyari, group managing director of the state-owned Nigeria National Petroleum Corp, said on Tuesday. The aim is that in two-to-three years “you will see a country that will become a hub of producing petroleum products,” he said.

Still, the project has been hit by delays with the initial opening date having been projected to be 2016, then 2019. Edwin said in a webinar on Thursday that the start of operations will now be pushed back to late 2021 due to the coronavirus. Citac says the facility is unlikely to start before 2023.

It’s also entering a very competitive market at a time when refining margins are being squeezed by the collapse in oil prices. In July, profit margins for refineries were at their lowest since 2010 and Patrick Pouyanne, the chairman of Total SA, described them as “absolutely catastrophic.”

To be successful, the refinery will also need to displace the cartels that have dominated Nigeria’s fuel-import business for more than two decades, a source of wealth for the politically connected and motivation for the continuing dysfunction of domestic refineries.

Yet once up and running, it could be a strong symbol of industrial progress in a country that has had many false dawns in its quest to lessen its dependence on crude oil.

“It tips the balance in a country that is at heart very entrepreneurial,” said Antony Goldman, founder and chief executive officer of Promedia Consulting, a political risk consultancy firm. It says to Nigerians “we can make money from making things work.”